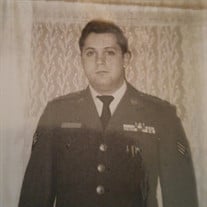 Albert Holbrook, Jr., 73, of Kettering, Ohio, passed away on Wednesday, June 5, 2019 at Ohio’s Hospice of Dayton with his loving family by his side. He had faced a tough battle with pancreatic cancer for the past 6 months. Albert honorably served his country in the United States Air Force and retired after 21 years of loyal service. Later, he retired as Customer Service Engineer at Emerson Electric Liebert Corporation. Albert enjoyed cooking, working in the yard and was an avid reader. He loved to vacation in Orlando, Myrtle Beach and Gatlinburg; however, his most favorite place was Walt Disney World. Wonderful times were had, and many special memories were made whenever visiting those places. He was preceded in death by his mother, Margaret (Gentile) Holbrook; father, Albert Holbrook, Sr.; sister, Sally (Holbrook) Clark; and in-laws, Calvin and Louise Radabaugh. Albert is survived by his wife, of 49 years, Connie (Radabaugh) Holbrook. Albert called Connie “the love of my life” and his “silver-haired beauty”. They shared a special and devoted love and he demonstrated his love in so many ways. Albert sang to Connie every day, until cancer took his voice. Also, left to cherish his memory are his sons, Joel Holbrook (Kris Ward Holbrook), of Miamisburg and Jeremy Holbrook (Niki Girardot Holbrook) of Kettering; sisters, Debbie Holbrook Lycans (Steve Lycans) of Columbus and Mary Driscoll Jones; brother, Robert Holbrook of Springfield; sisters-in-law, Susan Buck Holbrook of Springfield and Kim Smith of Galena; brothers-in-law, Keith Clark of Columbus and Philip Smith of Galena. Albert tremendously loved his grandchildren and was very proud of each of them: Jordan Holbrook (fiancé’, Hannah Lee Pennington), Kaitlyn Holbrook, Jacob Holbrook, Caleb Holbrook, Quentin Holbrook, and those who called him Grandfather, Chase Blanton, Josh Henderson, Paxton Henderson and Alex Girardot will always cherish the memories of their grandfather. Numerous nieces, nephews, great nieces, great nephews, other family and good friends will greatly miss Albert, as well. Per Albert’s final wishes, there will be no public viewing. A Celebration of Albert’s Life, including Military Honors, will be held 1:00-4:00 PM on Sunday, July 28, 2019 at V.F.W. Post #9927, 3316 Wilmington Pike, Kettering. Please bring a memory to share! In lieu of flowers, please consider a donation to American Cancer Society, Hospice of Dayton, or the charity of your choice in his memory. Albert was never alone in this cancer battle. His family never left his side. Albert was a true fighter and was determined to beat this cruel disease. In the end, the cancer grew stronger and Albert grew weaker. A positive outcome was not to be. Albert, you are loved and missed!

Albert Holbrook, Jr., 73, of Kettering, Ohio, passed away on Wednesday, June 5, 2019 at Ohio&#8217;s Hospice of Dayton with his loving family by his side. He had faced a tough battle with pancreatic cancer for the past 6 months. Albert honorably... View Obituary & Service Information

The family of Albert Holbrook Jr. created this Life Tributes page to make it easy to share your memories.

Send flowers to the Holbrook family.