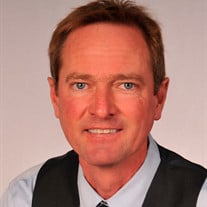 Eric J. (Ric) Suttman, May 15, 1959 - April 24, 2014, dedicated and loving father of his two cherished children Eliot (Ellie) & Declan, after a prolonged illness. Eric was a talented, lifelong musician and respected recording specialist; winner of multiple local Emmy Awards for music and production. He attended St. Albert the Great School, and was a graduate of Alter H. S. and the University of Dayton. Eric recently retired from UD after a 33-year multifaceted and award winning career at the University. A beloved father, brother, son, uncle, friend, mentor and political activist, he was also on the Board at the House of the People, and a recipient of the Dayton Peace Award. Eric founded and hosted the popular local music event known affectionately as "BarnJam". Eric was preceded in death by his father, Louis L. (Frosty) Suttman, and brother Martin Suttman. In addition to his two children, Eric is survived by his mother, Terese Laughrey; sister, Maureen; brothers, Joe and Tom; nieces, Erika Crossley (Steven) and Dakota Suttman; nephews, Louis W. Suttmann and Ben Suttman; grand nieces Alena Crossley and Lucy Suttman-White; many aunts, uncles and cousins; a multitude of loving friends; and Megan Carroll Suttman, the mother of Eliot and Declan. Visitations at Reis Legacy Center Meyer-Boehmer Chapel, 6661 Clyo Rd., Centerville, on Sunday, April 27th from 1:00-5:00 p.m. and on Monday, April 28th from 6:00-8:00 p.m.. Mass of Christian Burial will be held at Holy Angels Catholic Church on Tuesday, April 29th at 11:00 a.m. with burial afterward at Calvary Cemetery. In lieu of flowers, monetary donations in Eric's name to The House of the People or the Dakota Street Center are suggested.

The family of Eric J. Suttman created this Life Tributes page to make it easy to share your memories.

Send flowers to the Suttman family.