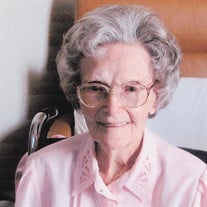 Florence Patrick Waggener (Floss) passed away on Wednesday, February 27, 2019. She was a faithful member of First Baptist Church of Kettering. Floss is survived by her loving husband of 76 years, Alf; daughters Pat Waggener Watts (David) and Sara Jean Waggener Snell (Dennis); sister, Jean Patrick Benge; grandchildren Patrick Watts (Lydia), John Watts (Michelle), Allison Greene (David), Stephanie Johnson (Chris), Jennifer Rullman (Stan) and Tonya Frank; and seven great grandchildren. She was born January 2, 1922, in Pelahatchie, Rankin County, Mississippi. She grew up in Jackson, Mississippi, and graduated from Central High School. In 1944 she graduated from Belhaven College with a B.A. in business and minors in both Math and English. Floss met her husband Herman Alpheus Waggener (Alf) in church when she was 16 and he was 18. Floss had a part in a play and Alf was the prompter behind the piano. He offered to give her a ride home, and four years later they began a marriage that lasted 76 years. In December, 1942, Floss traveled to Santa Ana, California, via train by herself. This was her first time out of Mississippi. Alf and Floss were married in Santa Ana on December 5, 1942. While Alf was in aviation cadet school, Floss and Alf moved every 7 weeks until July, 1943. Until July, Alf and Floss could see each other only on the weekends. In January, 1944, Floss moved back home to Jackson where Alf was called up for combat flying over western Europe during World War II. While Alf was overseas, Floss got a job at the Jackson Clarion Ledger newspaper. Alf and Floss wrote many letters that were censored by the Army. When Alf came home in November 1944, they were thrilled to be back together. After some R&R in Miami Beach, they moved to Virginia for Alf to go to Washington and Lee University. Soon, they were on their way to Topeka, Kansas, where Pat was born. Only six weeks later, Alf and Floss moved again, this time to Merced, California. More moves brought them to Tampa, Florida, back to Topeka, and then to Xenia, Ohio. The biggest move came in 1951 when Alf was assigned to Tokyo, Japan. The Korean War had started and Floss and Pat were not allowed to go with him. They moved to Jackson, Mississippi to live with Floss' folks. About 6 months later Floss and Pat were able to join Alf in Tokyo. Living in Japan was quite an experience for the family. Floss found a job as the head chaplain's secretary at Chapel Center. She was responsible for coordinating a once-a-month banquet for 400 - 500 people. Somehow, she managed to communicate with the five Japanese cooks how to cook for these banquets. One of the highlights of living in Japan was the opportunity Floss had to meet Miss Corrie Ten Boom. Floss hosted her at home and drove her around Tokyo to various speaking engagements. After hearing her stories, Floss encouraged Miss Ten Boom to compile her stories into a book, which she did later. It is The Hiding Place. In 1954, Floss, Alf and Pat moved back to the states to Midwest City, Oklahoma. A couple of months later, Jeanie was born. Then in August they moved again to Wichita, Kansas where Alf was chief of the Wichita Air Procurement District. After that there were moves to Montgomery, Alabama, Fairfax, Virginia, and finally to Fairborn, Ohio. Floss was the world's best military wife. She never complained about moving. She always said, "We will meet some wonderful people where we're going and we'll keep in touch with the friends we have made here." Floss began her teaching career in 1962 in Fairfax, Virginia. She taught fifth and sixth graders for several years. After moving to Fairborn, Floss was the head of the Business Department and taught typing, accounting and business classes at Fairborn High School. She continued teaching until 1982 when she retired. Floss encouraged many struggling students by helping them overcome their self-doubt and become successes. She always tried to find each student's strength and build upon it. Floss was always active in church. She was WMU director in several churches and always was an enthusiastic supporter of missions. She also taught Sunday School to all ages. When she and Alf were in their 80's, they taught the teen Sunday School class at their church! Floss had the gift of hospitality and encouragement. Everyone she met could be sure to receive a compliment from Floss. She encouraged many students and friends to do their best and go on and continue their education and get that college degree. She always told teens how proud she was of them. She always looked on the bright side of any situation. We will miss her smile and sweet southern accent. We will miss her encouragement during tough situations. But mostly we will miss her daily prayers for each of us. Floss is now in Heaven encouraging all the saints who are there. What a beautiful legacy she leaves for her family and friends! If desired, contributions may be made in Floss's memory to First Baptist Church of Kettering or Ohio's Hospice of Dayton.

Florence Patrick Waggener (Floss) passed away on Wednesday, February 27, 2019. She was a faithful member of First Baptist Church of Kettering. Floss is survived by her loving husband of 76 years, Alf; daughters Pat Waggener Watts (David) and... View Obituary & Service Information

The family of Florence P. "Floss" Waggener created this Life Tributes page to make it easy to share your memories.

Send flowers to the Waggener family.