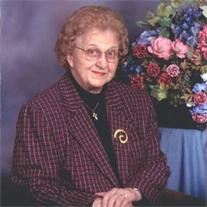 Grace E. Nugent, 91, of Centerville passed away on March 4, 2014. The oldest of nine children, she was born to Harry and Marie Luehrmann on August 13, 1922. Grace graduated from Good Samaritan School of Nursing in Cincinnati, OH and went on... View Obituary & Service Information

The family of Grace Nugent created this Life Tributes page to make it easy to share your memories.

Send flowers to the Nugent family.