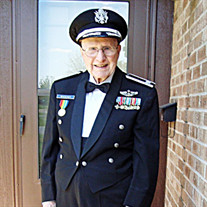 Col. Herman A. Waggener, Jr. (“Alf”) of Centerville, OH, age 101, entered the presence of his Savior at Ohio’s Hospice of Dayton from natural causes. Predeceased by his beloved wife of 76 years, Florence “Floss” Waggener, he is survived by his daughters, Pat Watts (David) of Frisco, Texas, Sara Jean Snell (Dennis) of Dayton, Ohio, grandchildren Patrick Watts (Lydia), of Brentwood, Tennessee, John Watts (Michelle) of Boise, Idaho, Allison Greene (Dave), of Buda, Texas, and Stephanie Johnson (Chris) of Savannah, Georgia, and five great-grandchildren. Known as “Alf” to his friends, “Pop” to his grandkids, and “Dad” to his daughters, Col. Waggener’s 101 years were forged in the hard-luck fields of West Tennessee. Born in Martin, TN, the fourth of eight children to Herman A. “Pop” Waggener, Sr., and Annie Elvira “Mom” Sadler, he often wondered aloud why his elder brothers had simple names like “Sam” and “Bob” and his parents waited until he was born to give him his extensively syllabic moniker, choosing to use the shortened version of his middle name to distinguish himself from his dad. His time in Tennessee was brief, moving to Denver, Colorado at the age of 2. His growing family lived a hard-scrabble life, even before the depression. Alf was very fond of his father, saying that he loved his family, but unfortunately, he was not particularly good at working a job to provide for them. Living at the poverty line and relying on the good graces of distant relatives instilled in him a love of family, a reliance on Jesus, and a thrift-mindedness that permeated for an entire century. Upon returning to his parents’ ancestral home of Jackson, Mississippi, Alf excelled and was named valedictorian at Central High School, receiving a scholarship to Mississippi College. He immediately started summer school and based on his aptitude in a summer botany class, was made a paid lab assistant during his freshman year, giving him the fiscal means to continue his degree. He graduated in 1941, and joined the Army Air Corps, where he received pilot training. Knowing that he would be leaving for the war soon, he and Floss chose to marry, and did so in 1942, in an intimate Santa Ana, CA ceremony, attended only by them, the minister... and Alf’s entire squadron. Stationed in England, Alf flew 53 combat missions over Western Europe in 1944 including nine hours flying cover for bombers over the Normandy coast on D-Day. His war experience cemented his life verse: 2 Timothy 1:6a, 7 - “Wherefore I put thee in remembrance that thou stir up the gift of God... For God hath not given us the spirit of fear; but of power, and of love, and of a sound mind.” Post-war, Alf remained in the newly created Air Force and began a career that took him to work in reconstruction-era Japan administering the contract to clean up the island of Iwo Jima after World War II and covertly flying supplies to the Korean front. He then worked at many domestic air bases as a procurement officer, culminating with an assignment to a joint military forces team at the Pentagon, where he did innovative, computer-based logistics research that saved the military over $10 million, and informs scholarly publications about bid processes today. He was also awarded several military decorations, including the Distinguished Flying Cross, Air Medals, Army and Air Force commendation medals and a D-Day medal. During Alf’s military service, he and Floss welcomed daughters Pat and Sara Jean, whom they raised in many towns across 1950’s and 1960’s America. They instilled in them, by word and deed, the same love of family and Jesus that sustained them through wartime. Alf and his family were active in Southern Baptist churches wherever they went, sometimes participating in new plants, sometimes teaching Sunday School, sometimes leading the music, always sharing the gospel. The juxtaposition of Alf’s faith and his military career led to many opportunities for others to witness to his steadfast faith. Alf retired from the Air Force, a full colonel, in 1968. He settled his family in Fairborn, OH. In 1969 he joined the Management Department at Wright State, where he earned his M.B.A., and taught until he retired in 1986. He was named to the emeritus faculty in 1984. After a serious heart attack in 1974, Alf and Floss re-doubled their emphasis on diet and exercise. Alf attributed much of his long life to the diligence and love of his sweetheart, each wanting to care for the other and to serve the Lord as long as they could, even leading a junior high/high school Sunday School class well into their eighties. After Wright State, Alf and Floss eventually moved to St. Leonard Living Communities in Centerville, OH for their second retirement. They were able to travel extensively, and Alf was able to enjoy his hobbies: his love of technology, his contributions to the Waggener family’s history through genealogical research, and his ministry through First Baptist Kettering. Even after Floss’s death, all the way to his own, Alf continued to cultivate his razor-sharp mind and humor. Every conversation he had made the other person feel like he or she was the most important person to whom he had ever spoken. He genuinely cared for everyone he met, and he made sure that the people in his life knew they were important to him and to God. In lieu of flowers, the family requests that memorial gifts be made to First Baptist Kettering, Ohio’s Hospice of Dayton, or the cardiovascular area of Kettering Health (Alf's heart hospital.) Family visitation: Thursday, August 26, 1:00 pm at First Baptist Kettering, 3939 Swigart Road, Dayton, OH, 45440 immediately followed by a Celebration of Life service at 2:00 pm. Military interment: Friday, August 27, 11:00 a.m. at Dayton National Cemetery, 4100 West Third Street, Dayton, OH 45428. Arrangements in care of Schlientz-Moore & Reis Life Celebrations. Words of encouragement may be shared at www.reislegacycenter.com. Live stream of the memorial: https://www.youtube.com/watch?v=lLOy-Iq8JXQ 2:00 p.m. EST

The family of Col. Herman A. Waggener Jr. created this Life Tributes page to make it easy to share your memories.

Send flowers to the Waggener family.