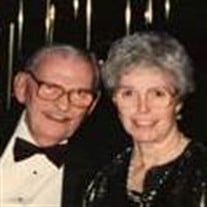 Irene (McDonald) Edmonds, 83, passed away at the home of her daughter, Anne, in Ohio on July 12, 2015 after a brief illness. In Ohio, Irene is survived by her daughter Anne and son-in-law David Wood; grandson, Benjamin and his wife Kaitlyn; and granddaughter, Taylor. In Indiana, she is survived by her son Brian, his finance, Terri Wyatt; grandsons, Thomas and Darian. In Michigan, she leaves her nephew, Michael Cole and his wife Marie and their 3 children, Nicholas, Matthew and Hannah. Irene also leaves behind her Sisters-Of-The-Heart: Jenny Keltsch, Cheri Hatch, Judy Liggett, Anne Bray, Bonnie Sanders and Emily Everett. She, also, has her church family from United Shepherd Methodist Church and friends too numerous to name. She was preceded in death by her husband of 49 years, Robert, on May 11, 2002; her sister, Linda Cole on April 2, 2015; her brother-in-law, Howard Cole in February, 2014; and her Sister-Of-The-Heart, Bonnie Funk in 2012. Irene was born on March 11, 1932 in Brighton, Michigan to Carlton and Gladys McDonald. She was a 1950 graduate of Brighton High School. Irene worked for Sears Roebuck at Glenbrook Square from 1972 until she retired in 1990. She attended the Community Christian Reformed Church on Lahmeyer Road, where she worked in the Mother’s Day Out program for many years. Irene was, also, a member of the Good Shepherd United Methodist Church. A Celebration of the Lives of Irene and Bob will be held at Good Shepherd United Methodist Church on Saturday, July 18, 2015 at 4700 Vance Ave., Ft. Wayne, IN. Family will greet friends from 3:00-5:00 p.m. followed by a brief service at 5:00 p.m. and light refreshments and fellowship after. Contributions may be made in Irene’s memory to Hospice of Dayton, 324 Wilmington Ave., Dayton, OH 45420 and to The Good Shepherd United Methodist Church, 4700 Vance Ave., Ft. Wayne, IN 46815. We would like to extend a special thanks to our friends at Hospice of Dayton who took such loving and exceptional care of Irene , and our family; their kindness and compassion was a blessing and appreciated more than we can ever say.

Irene (McDonald) Edmonds, 83, passed away at the home of her daughter, Anne, in Ohio on July 12, 2015 after a brief illness. In Ohio, Irene is survived by her daughter Anne and son-in-law David Wood; grandson, Benjamin and his wife Kaitlyn;... View Obituary & Service Information

The family of Irene McDonald Edmonds created this Life Tributes page to make it easy to share your memories.

Send flowers to the Edmonds family.