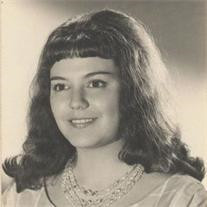 Isabel Eugenia Lugo-Garcia, 68, died on Friday, February 21, 2014 in Luquillo, Puerto Rico. Isabel was born in Mexico City, Mexico December 25, 1945. After growing up in Mexico, she became a naturalized U.S. citizen in 1999, and lived in Taos, New Mexico, Rio Grande, Puerto Rico, Athens, Ohio, Alexandria, Virginia and Bellbrook, Ohio. Isabel had a full, rich life. She lived and loved intensely. Her errors were almost always those of commission, not omission. She was able to say she had no regrets in life, except for the untimely death of her son Uriel. Isabel was much beloved as a mother and daughter, grandmother and granddaughter, as an aunt and niece, as a godmother and mother-in-law, and as a wife and friend. She was very generous with her time, her attention, comprehension and compassion with her family and many friends. Isabel could be demanding. She often had greater expectations for people than they had for themselves. She helped them expand their understanding of themselves and their possibilities. As a result, several people in various places where she lived considered Isabel their adopted mother. Even during her illness, Isabel found many moments of happiness. She never stopped being more concerned with the problems of others than with her own. She always thanked her friends and family for their phone calls and visits. She was grateful for the efforts of her doctors and nurses. In her last months she took the opportunity to say goodbye to her brothers, nieces and nephews, her best friends, and her grandchildren and daughter-in-law. And she accomplished her final goal of spending a few days with her son, Mauricio. Time that he needed to accept God's will. Life is short and fleeting. But Isabel made the most of her moments with us, and will be fondly remembered by many. Isabel is survived by her son Mauricio Millan Lugo of Culiacan, Mexico (wife, Manuela); her husband, Ricardo Garcia of Bellbrook; brothers, Carlos Lugo of Seattle, WA, and Eduardo Lugo, Jose Antonio Lugo, and Raul Lugo of Mexico City; and grandchildren, Jesus Octavio and Nelly Jatxiry, currently attending school in Bellbrook. The family will receive friends on Sunday, March 16th from 2:00 – 5:00 PM at Reis Legacy Center Meyer-Boehmer Chapel, 6661 Clyo Rd., Centerville. In lieu of flowers, the family requests consideration be given to making a blood donation, or a contribution to PARE Este, Inc., PO Box 928, Fajardo, PR 00738, a charity dedicated to animal welfare in Puerto Rico.

Isabel Eugenia Lugo-Garcia, 68, died on Friday, February 21, 2014 in Luquillo, Puerto Rico. Isabel was born in Mexico City, Mexico December 25, 1945. After growing up in Mexico, she became a naturalized U.S. citizen in 1999, and lived in Taos,... View Obituary & Service Information

The family of Isabel Lugo-Garcia created this Life Tributes page to make it easy to share your memories.

Send flowers to the Lugo-Garcia family.