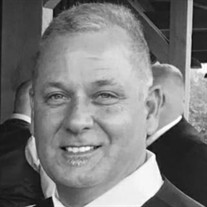 Jeffrey Alan Guernsey was born on June 11, 1968 and left this world on December 3, 2020, which was way before any of us were ready to say goodbye. Jeff was a guy with a servant’s heart. When he was barely a man, he entered our country’s armed forces and honorably served his country in the US Navy. Real experiences and tough life lessons prepared him for a lifetime of helping others and he was proud to have served. His willingness to serve others continued and steered him to the job he loved at Washington Township Fire Department. Over the past 30 years, Jeff was a Firefighter/EMT-Paramedic and fulfilled a variety of assignments at multiple WTFD Stations. He served the fallen and their families on WTFD Honor Guard. He was a member of IAFF 3369. Jeff loved his fire brothers and sisters and that love was definitely reciprocated. There are countless stories of Jeff’s ability to lead and mentor others. Anyone that worked with him, knew he had their back. He was recognized for his hard work and leadership skills and was appointed lieutenant. Jeff was the officer, who took care of his crew. He watched out for them. It didn’t matter if Jeff was on the scene of a blazing structure fire, a mangled multi-vehicle accident, or transferring an ill elderly patient-he gave his best to those he was serving and those serving alongside him. He, literally, was willing to sacrifice his own life for others. It would be impossible to quantify the number of lives Jeff has, personally, impacted. But, rest assured, he has left his mark on the world. Jeff valued friends. He could talk your leg off. You could count on him and if he said he would do something; he would do it. Jeff would give whatever he had to help his friends out. He rarely missed an opportunity to tease someone. His crude sense of humor made some stop in their tracks, but for most people, his jokes brought a smile to faces and deep belly laughs were not uncommon. Not many can pull off making derogatory remarks and have people walking away with a big smile on their face, but he could do it without even trying hard. Those comments weren’t mean-spirited, for Jeff his insults were terms of endearment. He didn’t mind giving you a hard time, in fact he enjoyed it. He lived life to the fullest and many around him are grateful to be called his friends and to have been along for the ride. And that ride-you just went, because you knew it would be fun. Jeff drew people to him, and you wanted to be with that larger than life guy. For all of his accomplishments in life, absolutely nothing was more important to him than his family. They gave him purpose and were his pride and joy! He spent the past 18 years with the love of his life, Jenny. They were partners in crime; spending time with family and friends, truly sharing everything. Jeff loved to go places and explore new things with Jenny. Traveling was a passion; Atlantic City to L. A., Punta Cana and more, Jeff was always excited about exploring new places. He was so proud of his kids; Erin, Matt, Alan, and Aidan. He made time for them. He would drop everything to take care of his family, even if it meant rushing somewhere to slay giant spiders. Big or small, their needs mattered. He was his kids’ biggest fan. You could see him on the sidelines at any of their sporting events. Jeff could be counted on. For as much as he loved his kids, he completely adored his grandchildren, Liam and Madi. He melted over being PopPop. Honestly, he was perfect for the role. He spent hours playing with them. He made sure to have fun with them and to show them how much he loved them. Jeff was totally invested in his family. There won’t be another like him. He was one of a kind and will be greatly missed! Jeff is survived by his wife, Jennifer Guernsey; mother and step-father, Sharon and Farrell Sparks; father, Douglas Guernsey; daughter and son in law, Erin and Josh Augustine; sons, Matthew Guernsey, Alan Guernsey, and Aidan Guernsey; grandchildren, Liam Jerome and Madison Jane; sister, Holly Cosler; half-sister, Megan Holmes; brother, Brandon Guernsey; mother in law, Karen Kossler; an extensive fire family and countless friends. Private Services will be held. In true Jeff fashion, he would have not wanted you to waste your money on a bunch of flowers for him. If you consider anything, Jeff would have been thrilled to know you would make donations in support of his favorite sport teams: Fairmont High School Wrestling, 3301 Shroyer Rd., Kettering, OH 45429 or Team AKA, 1701 Quincy Avenue #4, Napierville, Illinois, 60540. Arrangements in care of Schlientz-Moore & Reis Life Celebrations. Please share stories and photos at www.reislegacycenter.com.

Jeffrey Alan Guernsey was born on June 11, 1968 and left this world on December 3, 2020, which was way before any of us were ready to say goodbye. Jeff was a guy with a servant&#8217;s heart. When he was barely a man, he entered our country&#8217;s... View Obituary & Service Information

The family of Jeffrey Alan Guernsey created this Life Tributes page to make it easy to share your memories.

Send flowers to the Guernsey family.