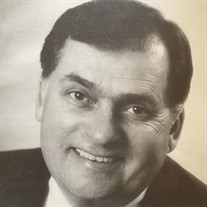 John Barry Estevez died on February 25, 2021. He was born on Mother’s Day, May 9, 1943 in Dayton, Ohio to Francisco and Mary Anne Estevez n?e Phelan. John was the ninth of ten children in a Spanish-Irish Catholic family. He attended Holy Trinity Catholic Church and grade school, and sang in the church choir as an adult for over 25 years. John graduated from Chaminade High School in 1961 and joined the US Navy serving as a Navy Corpsman in Vietnam (US Navy 1963-67 2nd Bat.7th Marines). He attended the University of Dayton, Sinclair Community College, and the International School of Broadcasting, which led to a career in radio (WPFB Middletown) and television (WRGT Channel 45). He was the Manager of Corporate Support at WPTD (PBS) Channel 16 in Dayton until he retired in 2001. John was active in local community theater including Washington Township’s Town Hall Theatre and Dayton Opera, and was also a reader with Words Radio Reading Services. He enjoyed traveling to see family in Michigan, Ireland, Spain, and California, but most of all, loved playing SKIP-BO at home with the grandkids. John’s sense of humor and beautiful voice were gifts he shared whenever possible, and his dedication to his faith and family will live on in those who knew and loved him. He was preceded in death by his parents as well as brothers Manuel, Miguel, Conrad, Alfonso, Carlos, Francisco, and sister-in-law Roberta. He is survived by his wife of nearly 39 years, Barbara, his daughter Monica Pruzinsky (Joey) of Clayton, MI; stepchildren Kristie Brand (Fred), Jenifer Gerard of Kettering, Jason Gerard of Dayton, and former spouse Carol. His cherished grandchildren Elaina (Corey) Pruzinsky-Jahlas of Seattle, WA; Madison Pruzinsky of Mt. Pleasant, MI; Nicholas, Jacob (Ashley), and Alison Gerard of Columbus; brothers Ramon (Janet) of Malibu and Joe (Constance) of Hollywood, CA; his beloved sister Carmen (?ngel) of Madrid, Spain, and sister-in-law Rosie of Beavercreek. He also leaves many cherished nieces, nephews, great-nieces, and great-nephews, and his very sad cat Harper. A celebration of John’s life will be held at 10:00 a.m. Thursday May 20, 2021 with a Mass at Holy Trinity Catholic Church, facial masks are required, and a private burial at Calvary Cemetery. In lieu of flowers, please consider a donation to St. Vincent de Paul, 124 Apple Street, Dayton, OH 45402 or Holy Trinity Catholic Church, 272 Bainbridge Street, Dayton, OH 45402. Arrangements in care of Schlientz-Moore & Reis Life Celebrations.

John Barry Estevez died on February 25, 2021. He was born on Mother&#8217;s Day, May 9, 1943 in Dayton, Ohio to Francisco and Mary Anne Estevez n?e Phelan. John was the ninth of ten children in a Spanish-Irish Catholic family. He attended Holy... View Obituary & Service Information

The family of John Barry Estevez created this Life Tributes page to make it easy to share your memories.

Send flowers to the Estevez family.