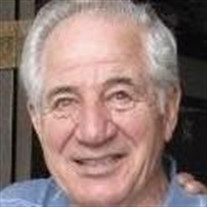 Joseph V. Mosconi, age 90, died peacefully on Wednesday, April 3, 2019. He was born June 20, 1928 in Alliance, Ohio to Anthony and Edith (Doria) Mosconi and was the youngest of their three sons. Joe was a natural athlete and played football, basketball and baseball in high school. He graduated from Powhatan High School in Powhatan Point, Ohio in 1946. He enlisted in the United States Navy and served two years at the conclusion of World War II. Joe attended the University of Dayton, and his first job took him to Shelby, Ohio where he met and married Jeanne Marie Berry. They moved to Kettering, Ohio where they raised two daughters and where Joe lived the remainder of his life. He worked as a computer analyst at Defense Electronics Supply Center (DESC) for thirty productive years. Joe retired in 1984 and continued to serve in the aeronautic community as a consultant with Martin Marietta, Inc. He was a devout and faithful Catholic, attending Ascension Church and later St. Albert the Great. Joe was an avid golfer who competed in many local tournaments, winning several of them. He was an active member of the Bella Villa Sons of Italy Lodge where he presided over the pizza booth at the annual Fall Festa for nearly two decades. Joe was fiercely competitive. He enjoyed bowling, bocce, and bridge, and was a loyal Cleveland sports fan. He will be fondly remembered for his charisma, his quick wit, his generous heart, and his unwavering devotion to family and friends. Joe is survived by his two daughters: Patricia (David) Heindel of Bothell, Washington, and Ruth Anne Hunter of Kettering, Ohio; nine grandchildren: Stephen, Sarah (fiancé Charles), Matthew and Joseph (Leah) Heindel, and Kathryn, Daniel (Brandi), Samuel (Maddi) and Bridget Robinson, and Jackson Hunter; and five great grandchildren from Ruth Anne's family: Corissa, Holden, Ruby, Jeremiah and Emmett. In addition to his parents, he is preceded in death by his brothers and their wives, Pat (Jeanne) and Nick (Jan) Mosconi. Funeral Mass will be held at 12:00 PM on Tuesday, April 16, 2019, at St. Albert the Great Catholic Church, 3033 Far Hills Ave., Dayton, Ohio 45429. Friends and family may call at 10:00 in the gathering room before Mass. Arrangements in care of Schlientz-Moore & Reis Life Celebrations.

Joseph V. Mosconi, age 90, died peacefully on Wednesday, April 3, 2019. He was born June 20, 1928 in Alliance, Ohio to Anthony and Edith (Doria) Mosconi and was the youngest of their three sons. Joe was a natural athlete and played football,... View Obituary & Service Information

The family of Joseph V. Mosconi created this Life Tributes page to make it easy to share your memories.

Send flowers to the Mosconi family.