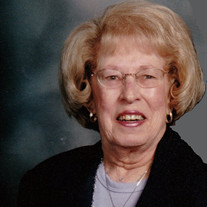 Juanita B. Greenway was born on September 30, 1929, in New Albany, Indiana, the last of eight children born to Christian G. Badger and Augusta Paetz Badger. She grew up in New Albany and graduated from New Albany High School in 1948. In 1949 she met Donald Eugene Greenway of Knoxville, Tennessee, and they were married on September 10, 1950, at Culbertside Baptist Church in New Albany. In February, 1951, Gene reported to the Army to serve his country during the Korean War. Juanita and Gene lived in Colorado until Gene finished his training and was shipped to Alaska. Juanita and Gene had one child, Curtis L. Greenway, born in 1953. Juanita believed that Jesus Christ is the Son of God, that He was crucified on a cross, that He died as punishment for the sins of all of us so that by God’s grace, we have the gift of eternal life. She was baptized on December 1, 1957. In sixty-four years of marriage, Juanita and Gene lived in Colorado Springs, Colorado; New Albany, Indiana; Evansville, Indiana; Kansas City, Missouri; and Dayton, Ohio. They visited the Hawaiian Islands and have seen much of Europe. They visited Alaska on their 50th wedding anniversary. Juanita served as a Cub Scout den mother. She worked for the Centerville (Ohio) school system, retiring in 1993. She loved the color purple, chocolate candy, freshly cut flowers, the sounds wind chimes make, the Cincinnati Reds, maple nut candy, and lawn ornaments (especially two large ducks, which, under the influence of her two granddaughters, she dressed in bonnets and petticoats). She was a fan of Glenn Miller, Johnny Mathis, Neil Diamond, and the Beatles. Juanita loved “late night snacks” -- ice cream and/or cookies and she did her best to introduce this tradition to her family. People have travelled thousands of miles for her pecan pies, German chocolate cakes, homemade chili, and spaghetti and meatballs. Juanita deeply loved her immediate survivors – Gene, Curt, her daughter-in-law Victoria Offenbacher Greenway, and her two granddaughters Sarah Rachel Greenway and Abigail Elizabeth Greenway. We miss her and will see her in Heaven. A Memorial Service will be held at 1:00 p.m. on Saturday, May 17, 2014 in the Fireside Room (please enter Door # 2) at First Baptist Church of Kettering, 3939 Swigart Rd.. Sugarcreek Township, 45440. Family will greet friends at the church from 12:00 Noon until time of service. If desired, contributions may be made in Juanita's memory to First Baptist Church of Kettering.

Juanita B. Greenway was born on September 30, 1929, in New Albany, Indiana, the last of eight children born to Christian G. Badger and Augusta Paetz Badger. She grew up in New Albany and graduated from New Albany High School in 1948. In 1949... View Obituary & Service Information

The family of Juanita B. Greenway created this Life Tributes page to make it easy to share your memories.

Send flowers to the Greenway family.