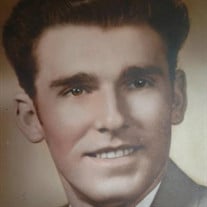 Leslie David Ridgeway, Sr., was called home to the Lord on Tuesday, August 18, 2020. He was preceded in death by his loving wife Beulah; parents Charles Augustus and Minnie Fraley Ridgeway; brothers Oral, Tom, Merle and Jim; and sisters Glenna and Louella. Les moved from Kentucky in the mid 1950’s to Dayton and found an apartment at 136 South Dutoit Street. He was very fortunate to meet the love of his life, Beulah, in the same building and found his first job in Dayton at Saul’s Carwash right behind the apartments. Soon after, Les gained employment with General Motors; working at Delco Moraine for 40 years. During this time, he was very proud to tell you he operated the world’s largest Transmat Press. He was dedicated to his employer; so much so, the last 10 years of his service he worked 12 hours a day, 7 days a week. Les was an entertainer at heart; while he was known for telling great ghost stories, music was his true passion. Although he never read music, he was a self-taught and very gifted musician. The guitar, fiddle, mandolin, banjo, saxophone, and drums were instruments he mastered and, he could even peck out a tune on the piano. Throughout the ‘50’s, Les was a member of several bands performing live on the radio. He enjoyed performing and he gained a lot of fans with his musical talent and his extremely good looks. He, also, bred, raised and trained sulky racehorses for many years. Some of his horses were outstanding winners! While Les loved his music and his horses; his greatest pride and joy was his wife, sons and grandchildren. Les was the most genuine, caring person on the planet. He tirelessly gave of himself to his children and grandchildren. He was genuinely the world’s greatest dad! Les is survived by sons, Leslie David Ridgeway, Jr. and wife Charma, Gary Ridgeway and wife Lisa; grandchildren, Logan, Jordan, Nolan; great-grandson, Owen; sister, Helen Whitt; and numerous nieces and nephews. Funeral Service will be held at 12:00 Noon on Saturday, August 22nd at Schlientz-Moore & Reis Life Celebrations, 1632 Wayne Avenue, Dayton. Family will greet friends 11:00 am until time of service at the funeral home. Burial will follow at Forest Hills Memorial Gardens.

The family of Leslie David Ridgeway Sr. created this Life Tributes page to make it easy to share your memories.

Leslie David Ridgeway, Sr., was called home to the Lord on Tuesday,...

Send flowers to the Ridgeway family.