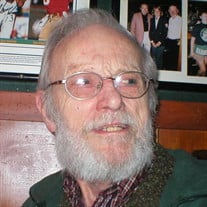 Louis (Bill) Huart, age 96, of Kettering, passed away on Monday, July 11, 2016. Bill was a WWII veteran serving in the U. S. Army Air Corp, 51st Fighter Control Sq. 10th Air Force from 1942-1945. Following the war he was employed at Wright Patterson AFB in federal civil service, and retired from WPAFB after 30 years. Bill was a devoted husband and family man and enjoyed spending time with his wife, children, in-laws, grandchildren, great grandchildren, nieces, nephews and the great nieces and nephews. He grew up in the 1920’s and 1930’s raised by his widowed mother, grandfather, and his father’s aunts. Bill had a lifelong love of automobiles and classic cars, attending many shows and auctions with members of his family. Perhaps that started with a challenge at the age of 10 or 12 when he was given an old Model T in disrepair. He was preceded in death by his loving wife, Jean; son, Michael; and brother, Frank. Bill is survived by daughter, Ann (Libby) Silcox; sons, Nicholas (Nina), David, and John (Shengnan Zhang); daughters-in-law Connie Huart and Barbara Huart; grandchildren, Philip, Carey Silcox, Matt Silcox, Jason, Anita and Clair Kruskamp; great grandchildren, Kilar Hughes, Tristen Collins, Maya Collins, and William Huart, and generations of dear nieces and nephews. Funeral Mass will be held Friday July 29th at Ascension Catholic Church, 2025 Woodman Dr., Kettering. Family will greet friends from 10 AM until time of Mass at 11 AM. Burial will follow at Calvary Cemetery. If desired, contributions may be made in Bill’s memory to Ohio’s Hospice of Dayton. Arrangements in care of Reis Legacy Center Meyer-Boehmer Funeral Home.

The family of Louis W. "Bill" Huart created this Life Tributes page to make it easy to share your memories.

Send flowers to the Huart family.