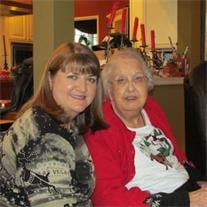 Event.observe(window, 'load', googleTranslateElementInit); function googleTranslateElementInit() { new google.translate.TranslateElement( {pageLanguage: 'en', multilanguagePage: true}, 'google_translate_element'); if (navigator.userAgent && navigator.userAgent.match(/Firefox/)) { // This is a terrible terrible hack, Google Translate blows away the sound on Firefox. // Calling reboot seems to bring it back. soundManager.reboot(); } } Louise McCowan, age 81, of Springboro, passed away on Friday, August 10, 2012. Louise was born in Flat Lick, Kentucky, but lived most of her life in Milford, Ohio where she was an active member of Pleasant Hill Baptist Church. She retired from Schottco Corporation. She was preceded in death by her husband, Bill; 6 brothers and 4 sisters. Louise is survived by her daughter, Donna and husband, Bob Chadwick of Springboro; grandsons, Ryan and Christopher Chadwick. Family will greet friends from 6:00-8:00 p.m. on Monday, August 13th at Reis Legacy Center Meyer-Boehmer Chapel, 6661 Clyo Rd., Centerville. Funeral Services will be held at 11:00 a.m. on Tuesday, August 14, 2012 at Reis Legacy Center. Burial will be at Amis Family Cemetery, Flat Lick, Kentucky. Louise was a loving mother and grandmother and will be greatly missed. If desired, contributions may be made in Louise's memory to Hospice of Dayton, 324 Wilmington Ave., Dayton, OH 45420.

The family of Louise McCowan created this Life Tributes page to make it easy to share your memories.

Send flowers to the McCowan family.