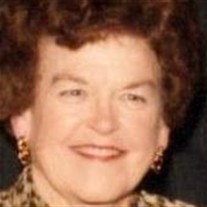 Mary Alice Eisenhauer, 91, passed away on March 16, 2016 in Oak Ridge, TN. She was born in Dayton on July 17, 1924 to the late Norman J. & Alice Ashton Ritzert. Mary Alice graduated from Julienne High School in 1942. She resided in the Dayton area most of her life. Since 2006, she has lived in the Oak Ridge area and since 2010 at Morning Pointe Assisted Living in Clinton, TN. Mary Alice was a member of St. Therese Catholic Church in Clinton. She was preceded in death by her loving husband of 63 years, Paul B. Eisenhauer, and is survived by four sons: David P. of Columbia, SC; Steven J. of Bonita Springs, FL; John T. of Melbourne, FL; and Mark J. of Oak Ridge, TN. Surviving family also includes eight grandchildren and five great-grandchildren. Mary Alice was an active member of St. Albert the Great Catholic Church in Kettering for more than 50 years. She was an avid bridge player and gardener. Gardening was a passion she pursued as a member of the Short Hills Garden Club, as a volunteer tour guide at the Cox Arboretum, and for many years by tending the rose garden at St. Albert’s. With her husband Paul, she was active in the Riverdale Optimist Club. Mary Alice was a devoted wife and loving mother and grandmother. Her dedication to her family, friends, community, and church was evident to all who knew her and her gifts will be cherished always. Visitation will be Tuesday, March 22, at 10:30 a.m. at St. Albert the Great Church, 3033 Far Hills Ave., Kettering, before a 12:00 p.m. Mass celebrating Mary Alice’s life. Interment will follow at Calvary Cemetery. Donations in her memory can be made to: Alzheimer’s Association, www.ALZ.org or the Athenaeum of Ohio, www.athenaeum.edu.

Mary Alice Eisenhauer, 91, passed away on March 16, 2016 in Oak Ridge, TN. She was born in Dayton on July 17, 1924 to the late Norman J. & Alice Ashton Ritzert. Mary Alice graduated from Julienne High School in 1942. She resided in the Dayton... View Obituary & Service Information

The family of Mary Alice Eisenhauer created this Life Tributes page to make it easy to share your memories.

Send flowers to the Eisenhauer family.