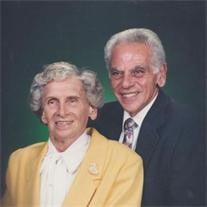 Event.observe(window, 'load', googleTranslateElementInit); function googleTranslateElementInit() { new google.translate.TranslateElement( {pageLanguage: 'en', multilanguagePage: true}, 'google_translate_element'); if (navigator.userAgent && navigator.userAgent.match(/Firefox/)) { // This is a terrible terrible hack, Google Translate blows away the sound on Firefox. // Calling reboot seems to bring it back. soundManager.reboot(); } } Mary J. Belardino, of Dayton, passed away on Tuesday, May 7, 2013 at Friendship Village. She retired from Frigidaire. Mary was a member of Daughters of The Immaculate Conception and loved baseball, gardening and traveling. She was preceded in death by her husband, Eugene in 2003. Mary is survived by son, Michael, of Dayton; sisters in law, Jane Danis, of Centerville and Jeanette (Dave) Green, of FL; brothers, Robert Daniszewski, of Centerville and Joe Daniszewski, of FL; and numerous nieces and nephews. Family will greet friends 9:00-10:00 a.m. on Tuesday, May 14, 2013 at Reis Legacy Center Meyer-Boehmer Chapel, 6661 Clyo Rd., Centerville. Mass of Christian Burial will be held at 11:00 a.m. on Tuesday at Emmanuel Catholic Church, 149 Franklin St., Dayton. Burial will follow at Calvary Cemetery. In lieu of flowers, contributions may be made in Mary's memory to St. Jude Children's Research Hospital, P. O. Box 1000, Dept. 142, Memphis, TN, 38148.

The family of Mary J. Belardino created this Life Tributes page to make it easy to share your memories.