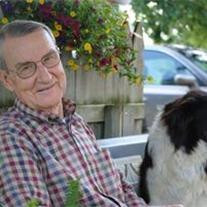 Robert M. Jessup, age 83, of Centerville, passed away on Thursday, January 16, 2014. Robert was born in Lewisburg, Kentucky to Walter and Ethel (Hooper) Jessup. After honorably serving his country in the U.S. Army during the Korean Conflict, he moved to Dayton, Ohio. Robert sought work at McCall's Printing Company, which later became Dayton Press. After retirement, he enjoyed working as a courier for Lab Corp and Grobmyer Dental Lab. Robert (Bob) was blessed with having the ease of striking up a conversation and made a lot of friends on his routes. He loved God and served his church, Franklin Street Baptist and later MorningStar Baptist, in many roles. It was important to him, for people to know God and, even while in the hospital, he would ask others if they had a relationship with God and were they involved in church. Robert is survived by his loving wife, of 60 years, Laura; son, Jeff & Debbie Jessup, of Charleston, SC; daughter, Darinda & Ed Reis, of Centerville; grandchildren, Lauren & Scott Jessup Cunningham, of Charleston, SC, Nicholas, Adam, Marin and Sara Reis, all of Centerville; and numerous other relatives and friends. Family will greet friends from 2:00-5:00 p.m. on Sunday, January 26, 2014 at Reis Legacy Center Meyer-Boehmer Chapel, 6661 Clyo Rd., Centerville. Funeral Service will be held at 1:00 p.m. on Monday, January 27th at the Korean Seventh Day Adventist Church, formerly Franklin Street Baptist Church, 200 W. Franklin St., Centerville. Burial will follow at Centerville Cemetery. If desired, contributions may be made in Robert's memory to Stuart Chapel Cemetery Fund, 6002 Stuart Chapel Rd., Lewisburg, KY, 42256 or Elk Lick Cemetery Fund, 6904 Green Ridge Spa Rd., Lewisburg, KY, 42256. Robert was a kind man of deep faith, who was always concerned about others. He loved his family and he will be greatly missed!

Robert M. Jessup, age 83, of Centerville, passed away on Thursday, January 16, 2014. Robert was born in Lewisburg, Kentucky to Walter and Ethel (Hooper) Jessup. After honorably serving his country in the U.S. Army during the Korean Conflict,... View Obituary & Service Information

The family of Robert Jessup created this Life Tributes page to make it easy to share your memories.

Robert M. Jessup, age 83, of Centerville, passed away on Thursday,...

Send flowers to the Jessup family.