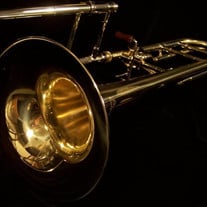 Steven C. Myers, 59, of Dayton, died on Monday, October 12, 2015 at The Oaks of West Kettering following a brief illness. Steve was born on July 5, 1956 in Colorado Springs, Colorado, the eldest child of Bob and Serena Myers. He graduated from Normal Community High School in Normal, IL in 1974, and moved to the Dayton area a few years later. He graduated from Wright State University in 1988 with a Bachelor of Arts in Music and a minor in business. During his years in Dayton, Steve worked at Reynolds & Reynolds, as well as the Victoria Theatre Association. More recently, he was part of the marketing department with the Dayton Philharmonic Orchestra, which later merged into the Dayton Performing Arts Alliance. Steve was a talented and dedicated musician, who for over 35 years was active in the area music scene as a trombonist and arranger. Steve performed in numerous and varied settings including many Wright State University theater productions, the Dayton Philharmonic Orchestra, the Dayton Philharmonic Concert Band, the Kim Kelly Orchestra, and several of his own “horn bands.” His love of music was not confined to performing, but also included the pursuit to understand and learn about music in its many varieties and forms. Steve was an avid St. Louis Cardinals and Chicago Bears fan, and appreciated playing fantasy football with area friends. He was also an avid movie buff. Steve will live on in the memories of family and friends, but his presence will be sorely missed. He was preceded in death by his wife, Diane Gentile (June 10, 2010) and his sister, Patty Myers (May 1, 2009). Steve is survived by his parents, Robert and Serena Myers, of Morton, IL; his brother, Dan of Chattanooga, TN; as well as three children: Brett, Asheville, NC; Roxanne, Kettering; and Craig, Dayton. He is also survived by one granddaughter, Phoenix Myers and special friend, Nancy Koets. Family will greet friends from 4:00-8:00 p.m. on Thursday, October 15, 2015 at Schlientz & Moore Funeral Home, 820 Miamisburg-Centerville Rd., Centerville. Funeral Service will be held at 12:00 Noon on Friday, October 16th at the funeral home. Burial will be at Calvary Cemetery. Following the burial, there will be fellowship and food at MCL Restaurant, 4435 Far Hills Ave., Kettering. If desired, contributions may be made in Steve’s memory to the Dayton Performing Arts Alliance, 126 N. Main Street, #210, Dayton, OH 45402.

Steven C. Myers, 59, of Dayton, died on Monday, October 12, 2015 at The Oaks of West Kettering following a brief illness. Steve was born on July 5, 1956 in Colorado Springs, Colorado, the eldest child of Bob and Serena Myers. He graduated... View Obituary & Service Information

The family of Steven C. Myers created this Life Tributes page to make it easy to share your memories.

Send flowers to the Myers family.